Which are the Jaipur Famous Temples?

Jaipur the Capital City of Rajasthan, not only famous for its diversified culture but also for prominent UNESCO World Heritage Site’s – Jantar Mantar & Amer.
The population of the city remains at the peak, as Its a popular tourist destination for visitors and thus forms west Golden Triangle tourist circuit with Agra and Delhi.
Undoubtedly, Pink City remains the tourist attraction throughout the year, however, still, there are few attractions which only opens for a specific duration.
To dive deeper, let’s have a close look at Jaipur’s Famous Temple Visits. Garh Ganesh, Moti Doongri, and Birla Mandir visit at Pink city remains the most prominent choice of devotee’s, be it-

Birla Mandir
Created and renowned by Birla family, this temple is situated near “Moti Dungri” Temple. Architecture Beauty of this temple (Laxmi Narayan Temple) stands out it from other temples of India. 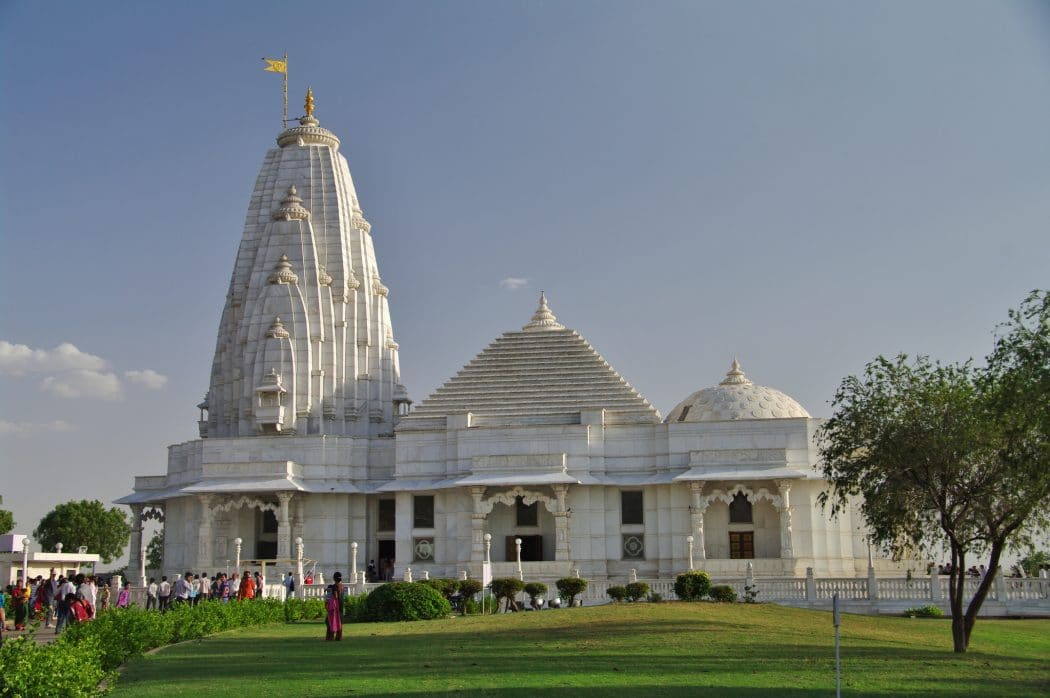 The temple worship Lord Vishnu and Goddess of wealth, Laxmi Ji. Scenes and famous quotes from Bhagavad Gita are presented on the walls of this temple.
White marble architecture of this temple encompassing with greenery not only brings a soothing experience but also gives a feeling of relaxation.
Speciality: Founded by Birla Family
Timing: 8 am to 12Pm | 4pm to 8pm
Other Attractions to visit – Moti Doongri Fort, Albert Hall
Best time to Visit – During Diwali
Address – Jawahar Lal Nehru Marg, Tilak Nagar, Jaipur, Rajasthan

Galtaji Temple
Galtaji temple is located in the outskirts of Jaipur nearly 10Km away from the main
City. This temple used to be a major tourist attraction for foreigners. Its the Best place for pilgrimage, a sacred Galta Kund also resides for a holy dip.
Within the complex, there are several temples. This tourist spot is majorly occupied by Monkey’s, within the complex, there is also “Ramgopalji” temple which is prominently known as Monkey temple. 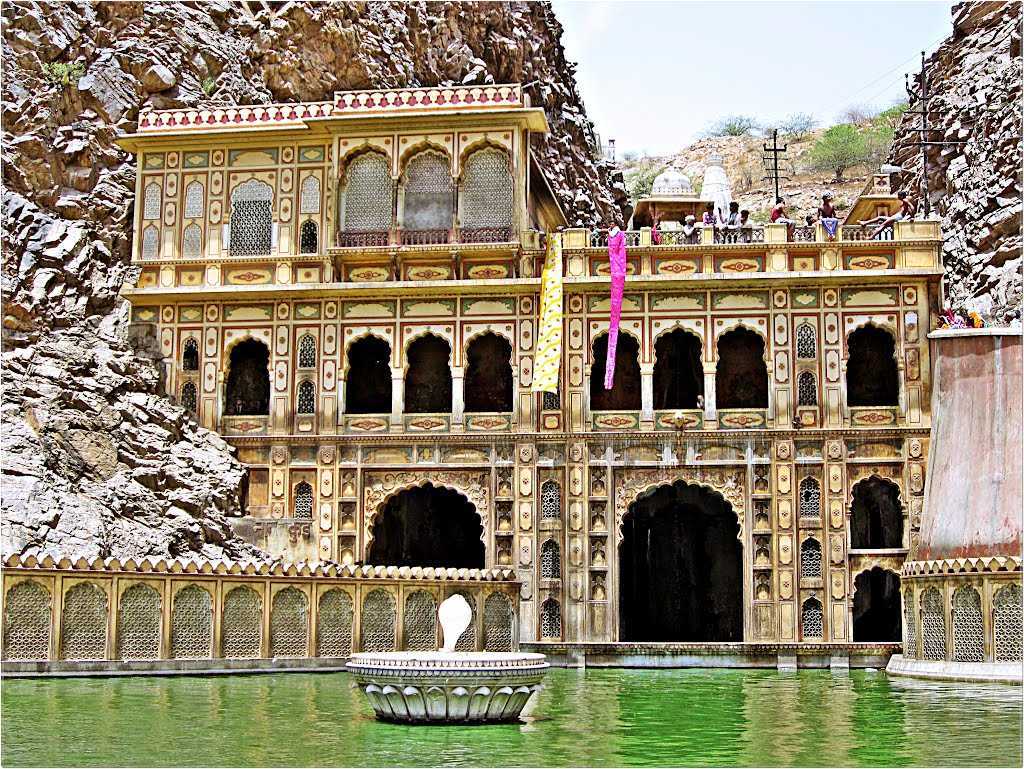 Amer Shila Devi Mandir
This is situated in Amber Fort, during Navaratri festival devotees of Goddess Durga comes here to celebrate the 9-day long Navaratri festival and on the 6th day, special prayers are offered to the Goddess.
As per ancient history, the idol of Durga was brought by Amber King Raja Maan Singh I from Jassore.
Timing- 6 am to 8 pm
Other Attractions to visit- Amber Palace
Address – Devisinghpura, Amer, Rajasthan 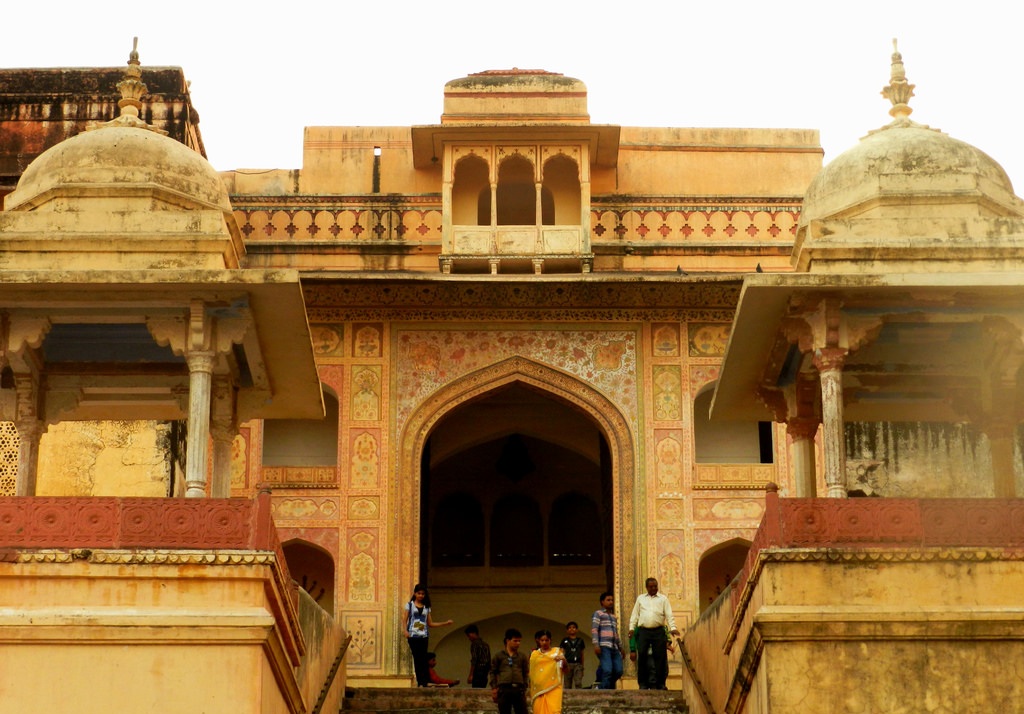 Moti Dungri  Temple
Moti Dungri Temple is Jaipur’s one of the religious temple. It was built in 1761 by Seth Jai Ram Paliwal. This temple is located at the top of Moti Dungri hill. Mostly devotees prefer to offer laddoos to pay respect to Lord Ganesha, on an average 1.25 lakh devotees visit this temple per year. Inside the temple, there is a lingam, which opens once in a year during Mahashivratri.
Speciality: There are three entrance gates, and architecture of Moti Dungri is built in Nagara Style.
Timing- 8 am to 9 pm
Other Attractions to visit– Moti Doongri Fort, Birla Mandir, Albert Hall Museum
Address – Moti Doongri Rd, Tilak Nagar, Jaipur, Rajasthan 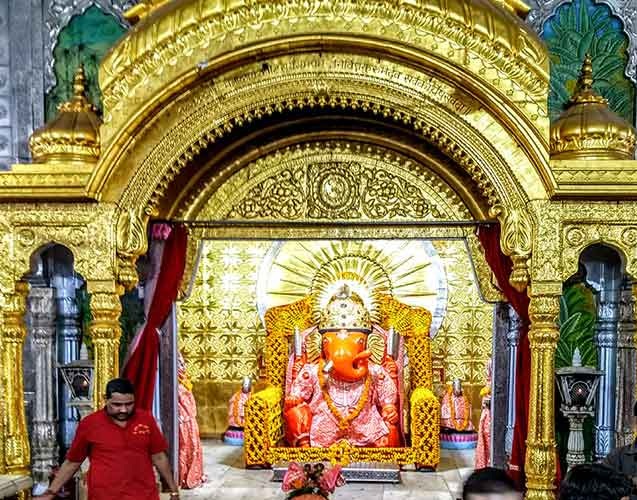 Neelkanth Mahadev Temple
This temple is devoted to Hindu’s, where devotees of Lord Shiva(Mahadev) offers prayer and seek blessings from Shiva Lingam. Neelkanth temple is situated in the Pink city and is used to be the point of attraction for Shiva devotees especially in “Sawan”.
Timing: 8 am to 9 pm
Other Attractions to visit – Amber Fort, Birla Mandir, City Palace

Garh Ganesh Temple
It is located on the hills of Jaigarh and Nahargarh Fort, this is an ancient temple of Lord Ganesha. As per a myth, it is believed that Ganeshji resides inside the temple in the form of a small child – Purushakriti. 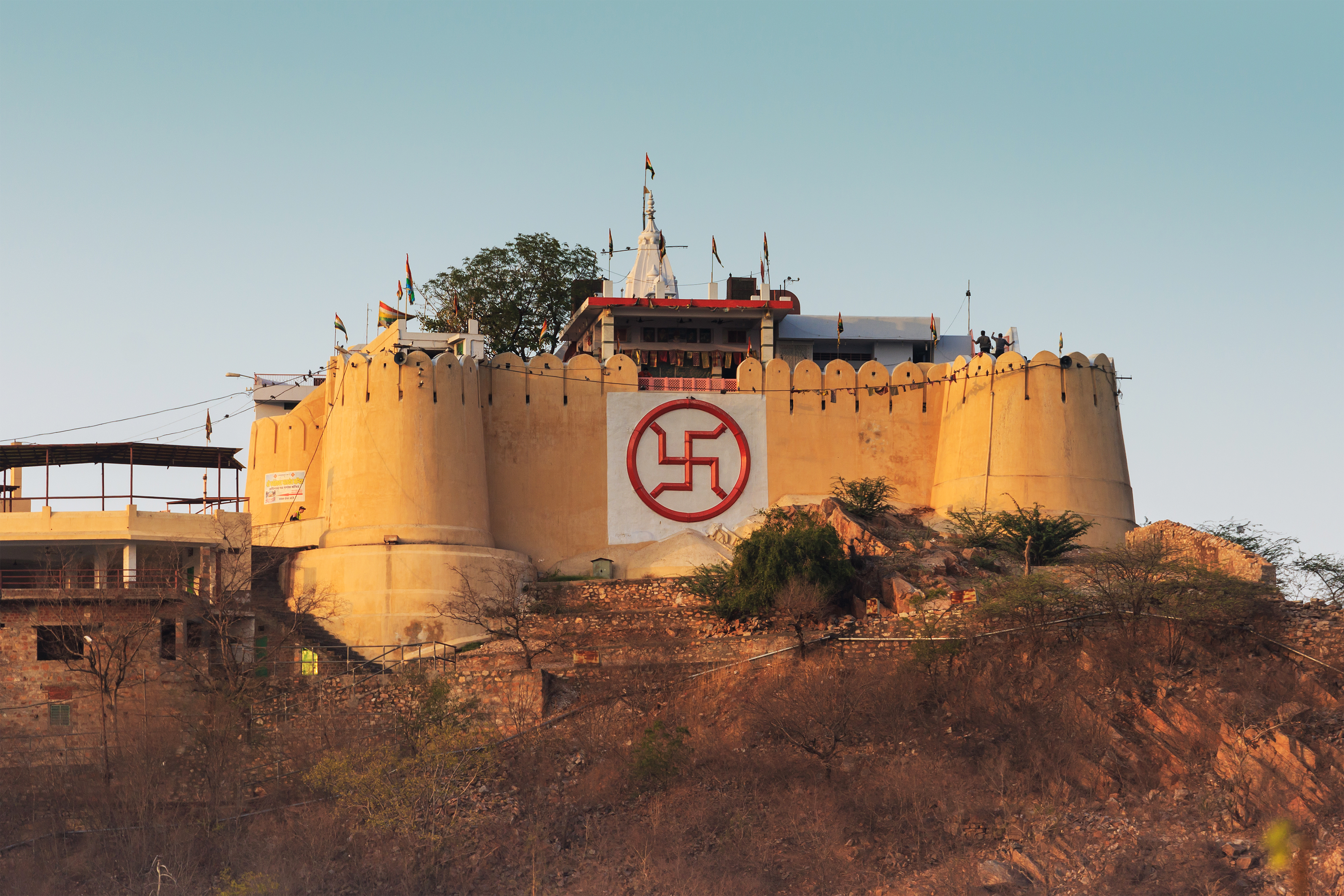 If look at its ancient history, this temple was built by Maharaja Sawai Singh, when he performed Ashwamegha Yag before the establishment of “Pink City”
Speciality: Idol of Ganesh Ji is termed as – Vigra Purushakriti.
Timing– 8 am to 9 pm
Other Attractions to visit – Jaigarh Fort, Jal Mahal
Address – Near Gatore Ki Chhatriyan, Krishna Nagar, Brahampuri, Jaipur, Rajasthan

Kale Hanumanji Mandir
This temple is located near Hawal Mahal- another famous tourist spot. As per the local population, this temple was built 1000 years ago. On Saturday’s this place becomes quite crowdy, as devotees congregate on a mass level to offer prayers to Hanuman Idol.
One more strange thing about this temple is Hanumanji Idol, usually, we have seen Lord Hanuman’s Idols in either Saffron/ red color, but here you will find that in something different-
Speciality: Idol of Hanuman Ji is Black Colour
Timing– 8am – 9pm
Other Attractions to visit – Khole k Hanumanji
Address – Amer Road, Chandi Ki Taksal, Janta Market, Jaipur, Rajasthan

Akshardham Temple
Unlike Delhi Akshardham, Jaipur’s Akshardham temple is one of the most visited temples throughout the year. Exceptionally it does not count among pink city ancient temples, but the popularity of this temple can’t be underestimated.
Devotees gather at Akshardham to worship Lord Narayana.
Speciality: This temple is Layered with Fusion Architecture.
Timing– 8 am to 9 pm
Other Attractions to visit -ISKCON
Address – Vidyut Nagar Vaishali, Jaipur

Kalki Temple
This temple is dedicated to Kalki, which is believed to be the 10th Avatar of Lord Vishnu, to end the Kalyug. Like most of the temples, this is temple is also built under the presidency of Raja – Sawai Jai Singh in the 18th century.
At the entrance of the temple, a white marble sculpture of Devdutt is located, as per a myth when the sculpture of horse get healed that day, Lord Vishnu 10th Incarnation will take birth, to end the ongoing kalyug.
Timing– 8am – 9pm
Other Attractions to visit – Tejaji Mandir
Address -Tulsi Marg, Badi Chaupar, Jaipur, Rajasthan
Speciality : Only Temple in the world, solely devoted to Lord Kalki.

Wish you Luck !!
All of the above-mentioned temples are worthy to visit and would give you a decent exposure to gain knowledge on India religion. Our cab drivers are proficient and make sure that you visit every Jaipur’s famous temple while on the trip. For info Call us at +91-9414455938